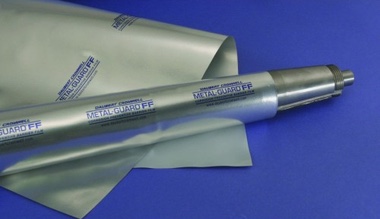 The VCI Film Metal-Guard® is a flexible & heavy-duty, heat sealable VCI foil barrier material. Also known as one of the most effective protective packaging solutions in the market, the film protects against corrosion damage caused by elements including humidity, moisture, oxygen, salt spray, aromas, grease and other airborne contaminants. It is often used to provide items with long-term corrosion protection in packaging during storage or shipment and whereas conventional methods would be difficult or costly.

The VCI Film Metal-Guard® is essentially a two-in-one barrier foil that removes the need for wrapping metal parts with VCI film and another layer of laminated barrier foil. With the film, it helps to improve packaging efficiency, reducing labour needs and costs. Typical applications include crating and wrapping machinery for export or wrapping smaller parts for long term storage.

The VCI Film Metal-Guard® Light is a light-duty, aluminium foil/nylon/polyethene structure, incorporated with a unique blend of corrosion inhibitors in the PE film layer. Featuring excellent sealant characteristics, this makes it ideal for hand-sealing in the field. Typical applications of volatile corrosion inhibitors include wrapping large machinery or metal components for export when crating is not used. The metal-guard light volatile corrosion inhibitor film also eliminates the need for wrapping metal parts with both VCI films and another layer of laminated barrier foil.